MailTrack, double check for Gmail, you already have Firefox extension 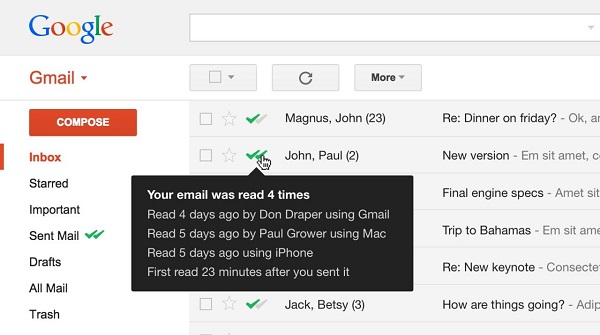 MailTrack is the adaptation of the concept of “double check” WhatsApp (i.e. when they actually read your message) but moved to email. It is a browser extension that lets you check whether your message recipient has opened or not.

So far MailTrack was limited to Chrome and Opera, but the company has just announced the arrival of its version for Firefox , one of its most important releases in recent months. The adaptation for smartphone , as we have from within, still have to wait a little longer.

MailTrack Firefox works exactly the same way as Chrome version: once installed the extension in the browser, you will see a couple of ticks next to each mail message, marking whether the message was opened or not. As you we explained here, the Open Confirmation is done by inserting a small image in the body of the email.

What may at first seem an invasion of privacy for some, it is actually a powerful working tool for others, such as equipment sales or user support people who have direct contact with customers, freelance professionals or even those which are fully injob search (and so you make sure that open emails with your CV).

“The arrival of Firefox has been a very natural step for us”, says Conrado Lamas, Marketing Manager MailTrack. “Firefox 48 has put us very easy thanks to the implementation of WebExtensions . The major browsers are converging to this solution add-ons, which greatly facilitates the work of developers.”

In fact, Microsoft Edge is the next browser in the crosshairs of MailTrack, as it has similar plans that will facilitate the adaptation of extensions of other browsers. “We will be watching this development in the same way you were doing with Firefox , ” says Conrad. Another of the most immediate projects of the company is to launch MailTrackInbox Gmail .

MailTrack recently surpassed the million installations , and measuring by Chrome users are now the third email marketing solution for individual emails in the market.The company maintains moment its business model freemium , where double check is offered for free, but some advanced control, monitoring and reporting are limited to the Premium version, which as we discussed already have 10,000 customers .

The mobile is not a priority for now

Probably one of the questions that make them more users MailTrack team is that when it will be available for mobile . But the truth is that time is not important for them.

“Our commitment Firefox has to do precisely with our approach to desktop right now,” says Conrad. “We know it is a bit out of fashion, with the dominance of smartphonesBut our user, and especially our customer, has a professional profile;. And time to work, we use computers.”

In other words, the smartphone has its place in the roadmap MailTrack and will always be part of it, but so far the company has no plans to focus on its development, since it does not have priority.