The amazing and historical world of Eton College

When you are looking for something to do between your meetings at Windsor Meeting Rooms you could take a tour of the local area and enjoy the architectural splendour of Eton College. Most people are aware of Eton College due to the number of politicians and members of the royal family that have received an education at this highly prestigious school. 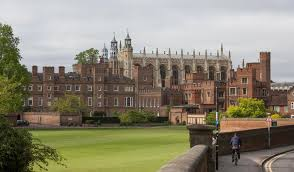 The school was founded back in 1440 by King Henry VI as an independent school for boys and was called King’s College of Our Lady of Eton. It is located close to Windsor just north of Windsor Castle  in the Berkshire. Back in 1868 a Public Schools Act defined the meaning of public schools and Eton was one of the original nine schools to b e declared as such.

As a public school they can charge for tuition unlike state funded schools  and this is around £13,000 per academic term and Eton is a part of a wider group of schools know as the Eton Group of independent schools. Eton does admit boys from families who can not afford the termly fee through their school fee assistance program and around 320 pupils each year use this option with around 70 places made available to boys free of charge. There are of course certain criteria to meet in order to receive either the free or school fee assistance places.  The school set up has remained incredibly similar to that of when it was first established. It is a full boarding school which means that the boys that attend the college live on site in rooms or dormitories. There are only four such schools remaining in the UK and these include Radley College, Winchester College, Harrow School and Eton itself.  Pupils attend the school from the ages of 13 to 18 with over 1,300 being enrolled.

Eton prides itself on the education that it gives to its pupils and as such the class sizes remain very small so that each pupil can have the dedication and attention that they need in order to thrive. It is thought that for every eight pupils there is one teacher. There are a number of well known royal family member and politicians that have attended Eton including Prince William, Prince Harry and David Cameron. It is also famous for two famous games. The first is the forerunner to Squash and the second is the “Eton Wall Game”. This is complicated game with a set of ancient rules and has been attributed to the Victory at Waterloo.