Going to the Giants Causeway 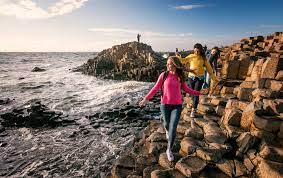 One of the most perfect natural wonders of the world is located in the North of Ireland. In the county of Antrim lies the incredible, and unusual Giants Causeway. This is a collection of basalt columns that extend out into the sea. You can walk out into the Irish sea from here and even glimpse the tip of Scotland’s Dumfries and Galloway. This is where the Giant Bennandonna was supposed to come from so that he could fight with Finn MaCool to see who was the strongest. 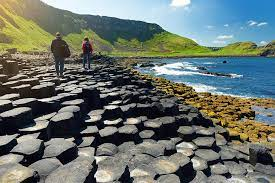 Sadly the Causeway is not made by mystical giants. It is formed by some unusually volcanic activity. Pressure and cooling create hexagonal columns, strange for nature to produce straight lines that form at different heights. Further up from the  Causeway you can see where the landscape is formed and made up of the columns to a great extent. The Giants Pipes for example are a nice little aside from the Causeway.

It’s relatively easy to walk to the Causeway along the North Antrim Coastal path. You will need to be protected by the elements as you wander along here. It would make great sense to get some nice Aran Sweaters from Shamrock Gift. These are water resistant jumpers that are also proficient at keeping out the cold. Best of all they’re Irish in origin so you’ll even look the part as you take this trek.