Quite a few of us can admit to spending rather too long in front of a mirror, whether we’re admiring the view or trying to fix our hair before we dare leave the house. Animals have been known to show an interest in their image too with apes, elephants and dolphins having a good peer into mirrors too. Put a cat or dog in front of one and it will be convinced there’s a rival in the vicinity! Mirrors are used to show us how we look and this comes in very handy when trying on new clothes for example. But what is a mirror and how does it work?

Standing in front of a mirror, you’ll see a perfect example of the conservation of energy and its effect on light. Light energy travels at some 186000 miles per second so when it hits an object – it has to go somewhere right? When light hits an object it can either go through it, sink into it and disappear or reflect back out. The energy is conserved because it is still there but is converted into something else.

During the day, light reflects off your body in all directions which is how we are visible to one another. Light rays bounce off randomly  and if you stand in front of a mirror, some of this light will stream in straight lines towards it. Rays of light are tiny pockets of light energy called photons which are fired in a stream and these shoot through the glass and hit the silver coating behind it. The light reflects off the mirror then in a more orderly way and is called specular reflection. Incoporate some light and the illusion of extra space with some Mirrored Furniture.

Silver atoms behind the glass absorb the photons from the incoming light energy and become excited. Due to this excitability, they become unstable so they try to compensate by becoming stable again and ridding themselves of the extra energy by give off more photons. The back of a mirror should usually be covered in dark material to protect the silver coating and block out light seeping through. Silver is the most reflective material and gives off almost as much light as what falls onto it in the first place. 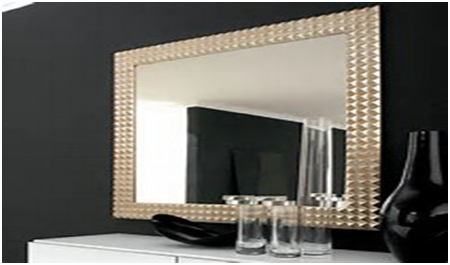 There are many different types of mirrors that can give us some very peculiar reflections. If you’ve ever been to a funfair with a crazy hall of mirrors, you’ll know exactly what they can look like! What you see isn’t really there but your brain tells you it is as it’s an optical illusion.

Plane Mirror – if the surface is perfectly flat then it’s a plane mirror. What you see is virtually the same as what’s there but the image is inverted from left to right.

Convex Mirror – if the surface bulges out in the centre then reflections will look smaller and further away. This is how driving mirrors work.

Concave Mirror – if the surface bows inwards, the reflection will seem nearer and bigger so magnifies an image. This type of mirror is used in shaving mirrors.