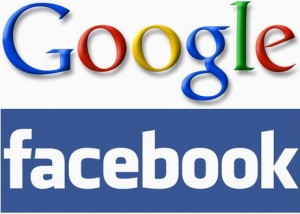 If you are a social media manager, take a vested interest in social networks, or simply have an account on one of the popular networks profile you will have no doubt heard about the privacy scandal surrounding Facebook. This centred around personal data entered on one’s Facebook profile which was being made available without users being aware. Facebook managed avoid legal action on grounds of privacy invasion because their privacy settings are ultimately transparent, if misleading.

While these privacy settings are questionable, I’d argue that a far more pressing concern is the fact you are being spied on by Facebook and Google albeit not against your will. So how and why are these two all-conquering internet giants being made privy to every detail of your life? Let’s start with Google –

The world’s largest search engine and most recognised companies is incredibly rich, it doesn’t charge users so how does it make all its money? Advertising, you may not realise it but Google search result pages are peppered with ads and every time you click on these, Google makes a few pennies, not much, much with millions and millions of searches made everyday, those pennies soon turn into pounds.

You might find it odd that Google target you with ads you’re actually interested in, that’s because if you perform a search when logged in, it’s recoded by Google and used to determine exactly which ads are displayed to you. The personal data Google possesses is invaluable to businesses.

If Google is omnipotent, Facebook is insidious in its quest to squeeze every last detail from it’s users. Facebook is a free service for the same reason as Google, its data is what advertisers have been wanting after for years. With ads on Facebook, businesses can gauge exactly who they want their ads to reach.

By using a number of filters, advertisers can drill down to a very specific market, for example, using the Facebook platform they could target ads at 18-24 year old students who like Britney Spears and go Fishing every 3rd Tuesday.

Such is the volume of data that Facebook possess on its users, the company can sit back and make its billions from advertisers while at the same time providing a service that users love. This is how Facebook has gone onto be so successful and why Google is desperate to get access to its data.

You Make a Grown Man Spy

So, while people rally round like headless chickens and jump on the ‘Facebook’ is stealing our privacy bandwagon, they are totally unaware that all the while the social networking giant is harvesting their personal details and distributing them to the world, helping them earn billions in the process.

The clever thing is, so entrenched is Facebook in everyone’s lives that backing out of this deal does not cross most people’s minds. Delete your account and fight the machine? Good idea but you’d certainly alienate yourself from all your friends. You could of course remove all your personal data and all your ‘likes’, but where’s the fun in that?

Facebook essentially have users cornered, it has become a social hub, leave and you’re disconnected. So long as Facebook has all this personal data it will remain lucrative, and you can’t even accuse it of spying since you provide all the data out of choice!